UPDATE: Hey everyone! Thanks for supporting your favorite pumpkin. There are two more days left for voting, and the winner will be announced this THURSDAY, OCTOBER 30 by 4:00pm. Send your friends over to vote before then! Have a great day. josh

Every year, as Halloween approaches, Carla and I carve a pumpkin together. However, last year we began a new tradition…we both carved our own pumpkin, and tried to decide whose was the best. This year, I thought we would leave it to those of you who are part of the “Intersections” community to decide whose pumpkin carving skills should reign supreme this year. Below are the pics of our pumpkins. Which one is mine and which  is hers will remain a secret until voting is over. I will announce the winner next Thursday right here at “Intersections”.

If you have never commented on a post before…this would be a great opportunity to start! 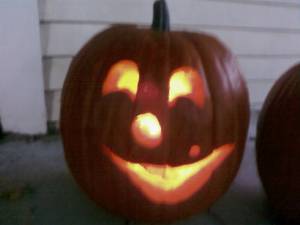 Hope you pick mine,