Our world, particularly here in America, is deeply divided. This division is often expressed through a series of labels:
Democrats and Republicans.
Liberals and Conservatives.
People who see an issue one way versus people who see the same issue differently.

We disagree, we label, and we essentially push those we disagree with aside and write them off as being “crazy,” or some other demeaning adjective. And this isn’t just a problem within our wider culture. This is a problem within the Christian community. A BIG problem. There are, according to some, 20-30,000 plus Christian denominations in the world today. All derived, so we like to think and hope, from the teaching and experience of Jesus. Yet, Christianity is deeply divided on so many issues. And, when we experience a disagreement we often just move to the other side of the road, put up a wall, and start a new church or a new denomination. Sometimes that is a necessary, unavoidable reality. But too often in this separating from one tradition and beginning a new we vilify and condemn the churches and denominations that we leave. Instead of partnering together on the causes we can agree on, we tend to erect massive walls that we hide behind—walls to keep others out, and keep us in.

But, this isn’t a new problem.

In Luke 9:46-50 (CEB) we find this same kind of mentality present among Jesus’ disciples:

An argument arose among the disciples about which of them was the greatest. Aware of their deepest thoughts, Jesus took a little child and had the child stand beside him. Jesus said to his disciples, “Whoever welcomes this child in my name welcomes me. Whoever welcomes me, welcomes the one who sent me. Whoever is least among you all is the greatest.” John replied, “Master, we saw someone throwing demons out in your name, and we tried to stop him because he isn’t in our group of followers.” But Jesus replied, “Don’t stop him, because whoever isn’t against you is for you.”

Jesus’ disciples were, like us, trying to label and separate.

This guy isn’t wearing our uniform, he doesn’t have the T-Birds jacket on (Grease reference, anyone?), or the group tattoo/haircut/whatever…there are endless ways we seek to demarcate and separate ourselves from others.

There’s an us, and a them (everyone who isn’t an us)

One thing we often overlook in this passage is what the guy is actually doing. He is performing exorcisms. This begs the question,  Is it better to have more demons in you, or less?

Jesus responds by saying, “Ugh. You guys still don’t get it? We are both working for the same team. We’re all trying to liberate people from the oppression and bondage in which they live!” (My paraphrase)

These disciples have created a divider, a wall, that essentially separates the them and the us. And often, the only way we can define “us” is by defining them (think about this for a second!).

We construct these walls, and they oddly can become sacred spaces. We defend them at all costs. We set up snipers to take out anyone trying to make it to the other side. No wonder that Christianity is a shrinking tradition in the West. Among other issues, the amount of hatefulness and hostility that exists between Christians of different stripes sends people looking for peace, compassion, and community running the other way. We, humans, have ALWAYS been talented at building walls and then guarding them with hostility.

The bringing down of these walls became a metaphor for the writer of Ephesians.

First, a bit of context. The Second Temple in Jerusalem had several courts–areas that were designated for certain groups. Among them (moving from the innermost to the outermost) was the Court of Priests (the innermost), the Court of Israelites (for the males), the Court of Women (want to take a guess?), and the Court of the Gentiles (this was the outermost area, and Gentiles, i.e. non-Jews, couldn’t get any closer to the action).  Acting as a barrier to the rest of the Temple precincts, reserved for observant Jews, was the Soreq. The Soreq was a five-foot-tall stone-wall that surrounded the inner courts of the Temple grounds. It was designed to keep Gentiles out of the inner courts.

In 1871, archaeologists discovered an inscription that warned Gentiles against trying to press further into the Temple precincts. Written in Koine Greek, it reads:
“No stranger [foreigner] is to enter within the partition wall and enclosure around the sanctuary. Whoever is caught will be responsible to himself for his death, which will ensue.” 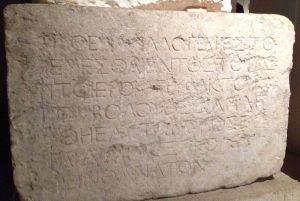 Isn’t that heartwarming? Yet it makes much sense of the imagery the writer of Ephesians draws upon when he writes these words about Jesus to a church struggling with the chasm between Jews and Gentiles:

“Christ is our peace. He made both Jews and Gentiles into one group. With his body, he broke down the barrier of hatred that divided us.” (Ephesians 2v14 CEB)

The question they had to wrestle with then–and we must wrestle with today–is why do we keep trying to divide what Jesus brought together.

It isn’t miraculous that people who agree can get together and chant their slogans, create an us and seek to vilify the them who are different. It’s miraculous–the work of God–when people who have divergent opinions and interpretations can occupy the same space and drink from the same cup and eat from the same loaf.

The reality is that we get to choose our responses. When people are hateful and hostile, we are left with a choice. We can choose to return their hate and hostility, to treat them as we’ve been treated, or we can choose to tear down the walls and seek peace and understanding.

As Jesus said (admittedly about a different issue, yet I think the underlying meaning applies here), What God has joined together, let no one separate (Mark 10v9).

One thought on “Labels, Walls, and the Divided Church”